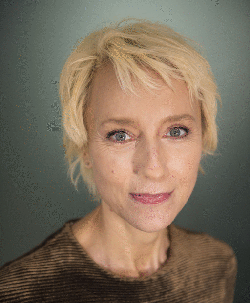 An outstanding stage and screen actress, Lia Williams has been nominated for a Tony Award on Broadway, and 3 Olivier Awards in the West End. Most recently switching roles with Juliet Stevenson between Elizabeth 1 and Mary Stuart at a live coin toss at The Duke Of York’s Theatre in The West End.

Her 54 film and television credits include The King is Alive for Dogma films, May 33rd- BAFTA nominated best actress, The Russian Bride- winner Best Actress at FIPA, Wallis Simpson in The Crown, The Missing, His Dark Materials and has just completed filming a lead in a new 6 part series for BBC1, The Capture.

Lia has directed one feature documentary ‘Nanaboshung’ and 3 shorts: Feathers, 10 Minute Tales for Channel 4, and the Bafta-nominated and Raindance Best Film winner The Stronger.

Lia is about to begin rehearsals playing opposite Clive Owen in ‘The Night Of The Iguana’ by Tennessee Williams at the Noel Coward Theatre in the West End. And she has 2 films in development to direct..